When we saw the sun was out this morning we packed our bags and hit the road. First stop, breakfast at the Uptown Diner. This happened to be the first time we had breakfast at the diner, and it happened to be their first all you can eat breakfast buffet. Bonus! There was a nice spread on the buffet-eggs, bacon (and crispy bacon I might add), sausage, waffles, pancakes (regular and chocolate), french toast, oatmeal, fruit, hashbrown potatoes, and beans. It was magnifique. The owner, Chris, (pictured left) is going to try to have the buffet once a month. So check it out when you get a chance.

2nd stop…the pool. It seems that it usually starts raining at some point whenever we go to the RUSM pool, but not today 🙂 . The sun was shining bright and I was feeling the heat of the tropics. Got to work on my tan and plow my way through Heart Sounds: 12 Catholic Doctors which is such an inspirational read. It tells the story of 12 different doctors, their personal faith journeys, and how they live their spirituality within the practice of medicine.  It will have you signing up for medical missions in no time.

3rd stop…powder puff football game on campus. I have no idea what the story behind this semesterly game is, but it is basically two female teams playing against each other. One team is full of semester 1 & 2 students, and the other semester 3 & 4 students. The game was well attended, full of mud-sliding, interceptions, and estrogen force. The post-game rainbow was spectacular!

4th stop…the village of Tanetane. I love to ride my bike out to Tanetane because the whole route is basically sea-side. It’s awesome to see the sunlight glistening on the water from bay to bay. Lots of people were out getting their shopping done and just hanging out with friends at the beach.  It’s a holiday weekend here in Dominica. Everyone is getting ready to celebrate August Monday. It was such a clear day, I actually got a nice glimpse of the island of Guadalupe, just north-west of us…

To the right is the lovely Indian River, home to the swamp witch scene in the Pirates of the Caribbean. 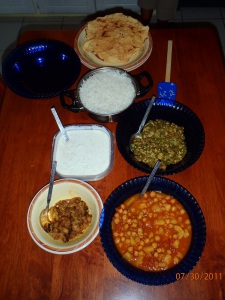 And finally, stop five…home cooked Indian cuisine prepared by a fellow New Orleanian. On the menu…papad (bread made from lentils), channa/chhole (chick peas, potato, masala), bindhi (okra), subzi adn (yellow squash) and raita (yogurt sauce). This meal was coupled with great conversation about Mardi Gras, fond memories of New Orleans, the fate of Reggie Bush, etc. Could this day get any better ???? It’s been a bright sun shiny day in the  DOM, full of gorgeous views and good eats. We had no rain during day light hours.  Such a nice change! Apparently though we’ve got a little tropical wave heading our way. There is a 90% chance of tropical cyclone formation. Check out NOAA’s website for more info. The system is supposed to move across the Lesser Antilles Monday night/Tuesday. Keep an eye on it y’all.